My buddy David had us up to his lake house this weekend. We arrived in the evening and headed out on the pontoon boat after catfish. Four anglers, four rods, 11 jug lines, three and a half hours, and all we managed to do was lose three jugs and catch a stunted, one-eyed channel cat! 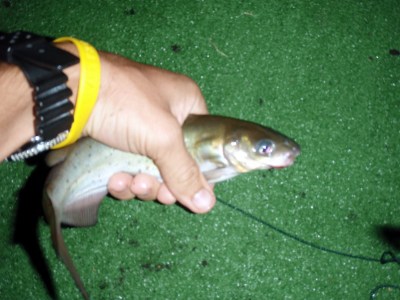 All we could hope was that the next morning would bring better luck. We awoke to excellent conditions and headed back out to fish for bass before breakfast. 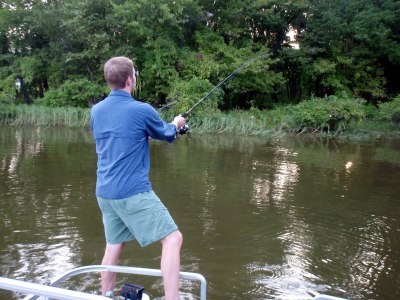 On the way out we spotted the three lost jug lines. One bait was intact, and more or less where we had placed it the night before, but the other two jugs had clearly been pulled out of position. One line was cut above the hook, a sure sign that something had been on it. The final jug had a fish on! It felt like a decent sized catfish, but unfortunately the line had been badly abraded and snapped as soon as I put tension on it.
After breakfast we traded the big pontoon boat for the small jon boat and headed up David’s secret bass stream: 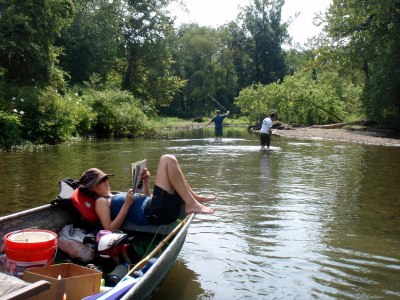 David wasn’t exaggerating when he talked up this spot. Even though it was a Sunday afternoon, we were completely alone and the fish were stacked up in every deep pool and log jam along the stream. The water was full of big hungry bluegills: Brennan tried out fly fishing for the first time and had some luck with the sunfish: 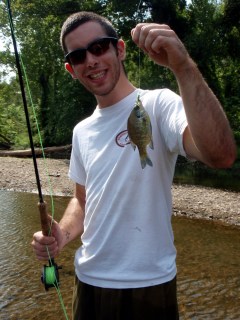 Bigger bass were hiding deeper but would attack big lures or flies. David caught his weight in big bass before lunch time: