It’s been a little while since I’ve gotten out after carp. While nothing gets my heart pumping like fly casting to a tailing fish, I figured that since I have a bunch of juglines rigged up, I may as well set some out with carp bait and see what happens. Dedicated British anglers have developed complex baits based on very scientific nutritional guidelines. I don’t know if “Rob’s Carp Assassin” is such a bait, but the directions read like a cookie recipe so I thought I’d give it a try.
The morning started brilliantly, right away I hooked up a beautiful fish on my version of the carp carrot fly. 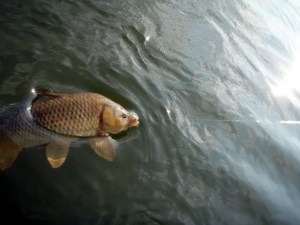 Next I paddled into a small lagoon, the same lagoon where Tara and I had placed our juglines a few days before, and baited 8 jugs with sweet smelling dough-balls. The lagoon lies right between two good flats and I knew that carp often hang out there between meals. Having just landed a fish in one area, I left the jugs and moved on to the second flat. The carp were everywhere! Even though the wind was blowing, the morning sun penetrated the water and I could see orange tails in every direction. After missing a few, I hooked up to a medium sized fish. Some carp don’t run far when they’re hooked but this one took off like a rocket. It paused about 100 feet away, and then swam off in a completely different direction. Unfortunately, my leader had tangled in some algae and the direction change pulled the hook free.
I reeled my fly in and looked over my shoulder. One of the jugs was moving! In fact it was twitching violently as though something was trying to submerge it. I quickly weighed anchor and paddled over. At the entrance to the lagoon is an old submerged bridge, and as I got close I saw that indeed something was trying to pull the jug underwater and under the bridge.
I grabbed the jug and hauled it in. Hoping for a carp and expecting a turtle, I was thrilled to see I had caught a big ol’catfish:

With only 8 jugs out for less than an hour, I caught this fish on a carp bait in the middle of the morning; it makes me question some of the conventional catfishing wisdom.