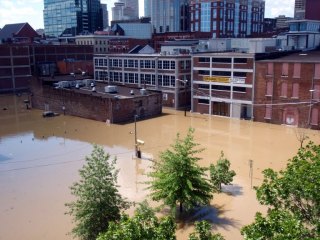 The recent flooding in Nashville knocked out one of the city’s two water treatment plants. There is no rationing of water but residents have been asked to limit unnecessary water use in order to conserve local water reserves.
In the spirit of water conservation Tara and I packed the car and headed East for a few days of camping in the Great Smoky Mountains. 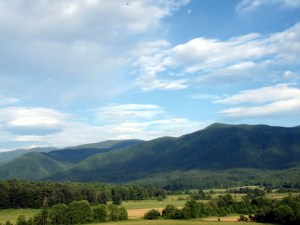 Lately I have been reading about tenkara fishing, a traditional method of Japanese fly fishing which employs a long rod and no reel. Tenkara fishing is ideal for catching trout on streams and small rivers. 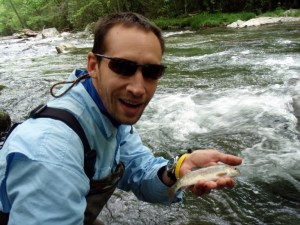 The most obvious difference between fly fishing and tenkara fishing is that tenakara fishing does not use a reel – thus the tenkara fisher has a limited amount of line and no drag system. This might be disadvantageous when playing a large fish but to be completely honest, few fishers, and almost no trout fishers actually need their reel to fight fish. Large fish can be landed with a simple handpole.
A limited amount of line also means a limited casting distance, but on small water there is so little room that fly fishers often find themselves reduced to short casts anyway. Tenkara rods are usually between 12 and 15 feet long, much longer than a normal fly rod. With this increased reach, a tenkara fisher can lift most of their line off the water which allows their fly to drift very naturally with the current, exactly what the trout are looking for.
I figured that the Smokies would be an ideal place to try out tenkara so I rigged up some handpoles and we headed off.

I brought two flies with me: the hare’s ear nymph in a variety of sizes and a yellow dry fly to imitate a ubiquitous Smoky Mountain insect known as a yellow sally.
The nymphs failed to elicit any strikes, although that may have been due to my lack of tenkara technique. In the afternoons as more yellow sallies began to hatch the trout began feeding on the surface. Whenever I spotted a feeding fish I waded stealthily into position and then dropped my dry fly right on the fish’s head, which usually elicited an immediate strike.

With the short line I found that I was more successful in setting the hook when a fish took my fly. Tenkara fishing uses a line which is roughly the length of the rod so that when the angler raises the rod tip, the end of the line, hopefully with a trout attached, swings right to them.

We were only able to stay two nights, and the weather was only mostly cooperative, but we had fun and caught some fish. Tenkara is a simple and effective fishing method and I won’t be surprised if it’s popularity continues to grow.

One thought on “Higher Ground”