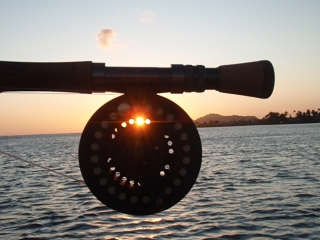 A few years back I had an encounter with a Florida Gar. I was in Miami, fishing with Cordell Baum, when I spotted a gar holding in the middle of the canal.
“Strip your fly past it,” he told me “it will follow from behind, whack your fly with it’s nose, then turn and take the hook from the side.”
I made a cast and pulled my fly quickly back past the gar. As promised, the fish followed, but it didn’t bite. Soon, the fly was near the bank and I was running out of line.
“Keep going!” Cordell urged.
In a desperate move, I stopped stripping line and used my rod tip to jerk the fly parallel to shore. The gar surged forward, swiping at my fly with it’s long nose.
“Stop moving!” Cordell cried.
I let the fly go dead in the water. The fish turned in a quick circle and grabbed my fly from the side. Gar may look skinny from above but they have surprisingly deep, heavy bodies. The fish pulled hard and I held on but my hook failed to penetrate it’s bony jaw and the fly popped loose.

Yesterday, during an afternoon of fly fishing for bonefish, I looked over to see Kirk with his rod tip held high, jerking his fly through the water just as I had done with the gar. His line went tight and, unlike with the gar, after a short battle he brought the fish to hand. It was, not surprisingly, the closest thing we have to gar on the flats, a cornetfish.

One thought on “Nunu”