On the Monday morning after our weekend of semi-successful fishing, Tara and I borrowed a car and drove back out to the lake for a last shot at some carp.
The water was deserted and we arrived at the perfect time, that mid-morning window when the sun is high but the wind is still. Right away I saw a feeding carp, but my cast got no reaction, the fish just moved slowly off into deeper water.
I made my way slowly along the shore of the small bay, scanning carefully for fish feeding amongst the submerged rocks. I spotted a cloud of mud and froze. Soon I saw the back of a nice fish rising slowly out of the murk. I waited until it began to swim lazily away and laid a cast alongside, placing the fly just ahead and to the side of it’s nose. The carp scooted forward, paused ever so briefly, and then my line went tight!

A few minutes later, on the far side of the bay I watched a big fish that I had stalked so carefully flee in a puff of mud. The sunshine was warm and I was still riding the high from my first fish so rather than move on I just stopped to enjoy the morning for a moment. Some distance away a shadow was gliding through the water. As it made it’s way slowly towards me I watched the shadow resolve into a nice little carp. When it came within reach I dropped my fly in front of it and was immediately rewarded with a bite. 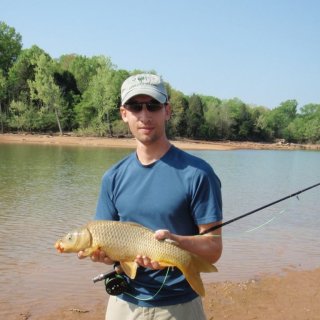