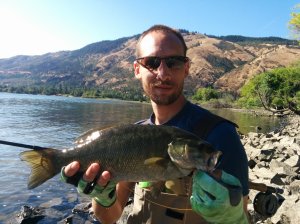 One beautiful summer evening after a dinner of tacos and beer at the Trillium Cafe, Tara and I took a walk. We followed Hood River from downtown, stopping to eat a few fat blackberries before making our way onto The Spit, a narrow park extending into the Columbia River.  Normally The Spit is an isthmus but the very low water level had made the west side of the park into a lake, with a low sandbar separating it from the river proper. 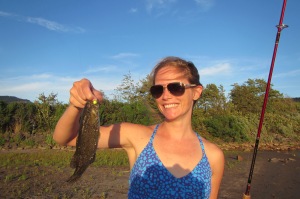 We made our way onto the sandbar just as dusk began to settle.  I had an ultra-light spinning rod with a white curly-tail jig and as we made our way across the bar I managed to catch a handful of small bass.  On the far bank was a restaurant with a patio overlooking the water.  There was a live musician entertaining the diners with upbeat acoustic guitar covers of some classics.  Just as we got near the end of the sand bar I hooked a pretty good fish, big enough to take some line off the reel, it went jumping and splashing around the lake for several minutes.  While playing the fish I heard the musician smoothly begin to improvise some new lyrics,  “Look at that guy over there.  He just caught a fish.  It looks like a pretty nice fish!”  He finished the song just as I pulled the bass to shore.  “Check out the fish that guy just caught” he told the audience.  Everyone turned to look.  I held the fish up high.  “That’s a nice fish! Let’s give him a round of applause!”  Everybody clapped as I gave a little bow and slid the fish back into the shallows.  It’s probably the closest I will ever get to feeling like a Bass Pro! 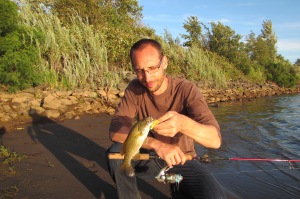 The Fishing Dojo offers a unique style and philosophy of fishing that challenges convention in pursuit of the ultimate goal: Have more fun and catch more fish!
Loading Comments...
%d bloggers like this: