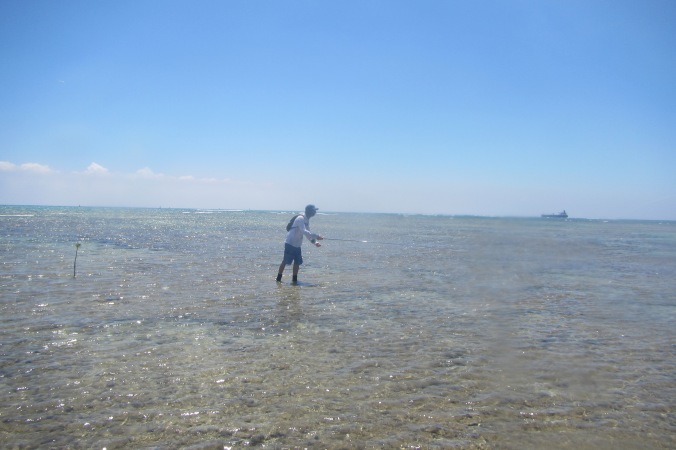 On a calm, sunny day we packed the inflatable boat into the car and headed to a spot I had not been to in years. We paddled past boats and buoys and one curious sea turtle and pulled onto the flat at dead low tide.

Right away I spotted a couple of small bonefish in a lagoon and got a good follow but no bite. The water was so shallow that I anchored the boat and walked out to fish near the surf. On my second lap of the area I spotted a nice feeding bonefish in a sandy depression. It was in hip deep water so I cast fairly close and the fish spotted the fly as it dropped to the bottom. I paused while the fish darted forward and did that little wiggle that bonefish do when they eat. I set the hook and cleared the line as the fish took off for the deep channel nearby, but then it broke off. I reeled in and inspected my line. The tippet had broken above the fly, probably weakened due to tiny abrasions from the reef suffered on my previous casts.

Disappointed, I waded the short distance to the boat, where Tara reclined with a magazine, and began to re-tie. In my peripheral vision I saw the surface of the water bulge, not the splash of a startled bonefish but more like the up-welling when a wave washes over a submerged boulder. I turned and saw the biggest bluefin trevally I probably will ever see. The fish was in thigh deep water, no more than ten feet from me. It had approached and then taken a quick 90 degree turn, boiling the water, and was headed directly away from me, not fast, just cruising towards the drop off. The body of the fish was probably ten inches wide and, stood on it’s nose, I am sure the tail would have reached my chest. Looking at pictures of big jacks online, I think it must have been more than fifty pounds, perhaps as much as seventy.

As sad as I was to lose the bonefish, it was worth seeing that omilu, just for the knowledge that those fish are still on the flats of Hawaii.

The Fishing Dojo offers a unique style and philosophy of fishing that challenges convention in pursuit of the ultimate goal: Have more fun and catch more fish!
Loading Comments...
%d bloggers like this: