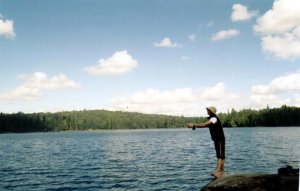 If you ever have a chance to vacation in Ontario, I highly recommend that you visit Algonquin Provincial Park. Most of the park is wilderness – thousands of lakes and low hills shaded by deciduous forest. Tara and I camped by a lake there in the early fall. The park was empty yet, as the hills had not fully bloomed with fall colors, and most of the summer blackflies and mosquitoes had met their ends in the chilly nights. We rented a canoe and paddled all over, spotting birds, beavers, and even a mother moose with a baby in tow. I was uncertain whether there were fish in the lake. The man who delivered the rental canoes to the camp ground had said he had seen people catch lake trout, but never anything else. Indeed, over the first few days I saw almost no signs of fish. I had only a fly rod with me, and I was not equipped to fish deep, where lake trout tend to stay.
Nevertheless, each evening Tara would paddle me around so that I could cast to anything that looked promising. Not knowing what I was fishing for, I tied on an olive woolly bugger and simply threw it in random directions. After several evenings of this, with no results, I gave up and began reeling my line in.
“You’ll never catch anything without your fly in the water.” Tara said sagely.
Rightly chastened, I picked up my rod and recast.
We were drifting over a shallow portion of the lake, perhaps 10 or 12 feet deep, and dusk was just settling in. I let my fly sink near the bottom before retrieving it with short, lazy strips. In one instant two things happened: my fishing frustration dissolved; I just sat there, admiring the beauty of the lake, and I felt two lightning quick tugs. I lifted the rod in disbelief as line started peeling off of my reel. Several minutes later Tara and I watched the smallmouth bass break the surface and somersault through the air. It fought hard and jumped several more times before I got it close enough to lift into the canoe.
I have no pictures of that fish, it exists only in my and Tara’s memory. It was extraordinary, the biggest smallmouth that I’ve ever caught, but it was the perfection of the entire experience that has really stayed with me. When I get frustrated, which happens often, I remember that moment, and I smile and keep fishing, because I’ll never catch anything without my fly in the water.