Hooray! Carp season is officially under way. I expect it will be another month at least before the fishing becomes consistent but after a solid week of warm weather I was able to find some active fish. 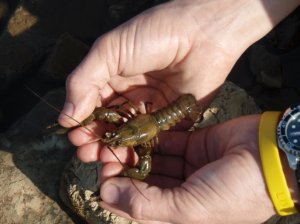 While exploring new spots this winter I found a bay which was cut off from the rest of the lake as the water level fell. This winter “pond” is pretty big and I guessed that it might have trapped some carp, and that it might just be deep enough for them to have survived the cold winter. I also guessed it was shallow enough that after only a week of warm days, the carp might have thawed out and started feeding. I was right on all counts.

The fishing was a bit difficult. The pond was pretty muddy and the fish were still moving slowly so it was difficult to detect strikes. However, if there is anything that carp fishing has taught me, it’s that persistence pays off, and so, after losing several fish, I landed my first carp of 2009.