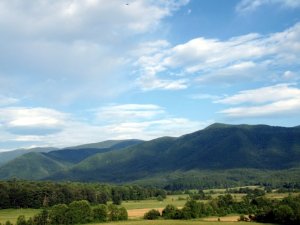 Back from the Smokies. The park is heavily trafficked but so well managed that it’s still a pleasure to visit. The weather was pretty good during our visit, but the twice daily thunderstorms had really filled the rivers. When I stopped by Little River Outfitters to pick up some flies, I found out that Little River was flowing somewhere above 600 cubic feet per second. To put that number in perspective, the average flow at this time of year is around 150 CFS! Moreover, the creek which I had hoped to fish was closed due to agressive bear activity!

I took a few hours to walk up the headwaters of Little River and fish a few spots. I’m really only a “fair weather trout fisher” and so when conditions are abnormal I don’t have the skills or experience to adapt. Consequently I wasn’t expecting to catch anything and I wasn’t disappointed. Still, it was great to get into the mountains and cool down a little bit.
On the way back to Nashville, we stopped by a lake for a picnic lunch. I was hoping to hook a few bluegills after we ate, but the shoreline didn’t look very fishy. I commented as much, and our friend Heather, a Tennessee native, replied that she knew of a nearby spot where people fed bread to big carp. That got my attention and as soon as I finished eating I ran off to look for these hungry fish. 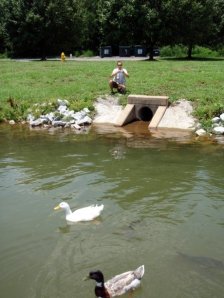 Two carp can be seen here. One in the bottom right corner and the other just behind the white goose.

I soon found them and within a few minutes I had Tara, Heather and Michelle chumming with bread while I rigged up my fly rod. I don’t have any bread flies in my collection so I simply took a plain orange nymph and hooked a piece of bread crust on it. My first cast put the bait right in the middle of the feeding fish and in less than a second my indicator was jerked underwater. I only had the fish for a moment, long enough to tell it was pretty big, before my leader snapped. Repeated casts were less successful. The bread quickly became soaked and fell free of the hook. The carp were really keying in on the bread and wouldn’t look twice at my carp bugger. But they were interested in my indicator, a white Thingamabobber about the size of a chunk of bread.

I have said this before, and I’ll say it again: we don’t catch fish with hooks or flies or rods or reels. We catch fish with our brains; we catch fish because we are smarter than the fish. I watched those big lips break the surface and gulp at my indicator, and I thought for a couple of minutes. Then I reeled in, slid the indicator all the way down the line until my carp bugger was hanging maybe half a centimeter below it, and recast. Once again a carp gulped at my indicator as soon as it hit the water, but this time it also gulped down my fly which did it’s job and hooked firmly in the fish’s mouth. I played the fish hard, trying to keep it away from the nearby piers and pilings. I was without a net, but with a little help from my friends, we got the hungry cyprinid on shore for a photo:

The Fishing Dojo offers a unique style and philosophy of fishing that challenges convention in pursuit of the ultimate goal: Have more fun and catch more fish!
<span>%d</span> bloggers like this: