I went tailwater fishing last week. In the south that usually means fishing for trout, but with the water warming as we near the middle of June I had a feeling there weren’t any trout left in this particular spot. Anyway, I had bigger fish to fry. I was trying to find gar, which I had seen cruising this stretch before. Barring that, I thought I’d try nymphing for buffalo, which I’d also seen feeding in the area.
Niether plan worked out. A thunderstorm that morning had caused one of the feeder streams to jettison clouds of yellow silt into the river. In this situation, many species stop eating altogether, and besides, the water was opaque, making spotting fish pretty much impossible.
So, I found myself stuck upstream of the feeder creek where the water was still clear, standing in the middle of the current and drifting nymphs along the shoreline for bluegills. In classic nymphing style, I let my line swing all the way downstream of where I stood, and slowly took out the slack, causing my fly to “rise” in the current just as a live insect might. Sure enough, just at that critical moment my indicator disappeared and I felt a fish. To my surprise though, the fish jumped clear of the water, something bluegill don’t do, and indeed I saw that I had caught what was possibly the last remaining trout of the spring: 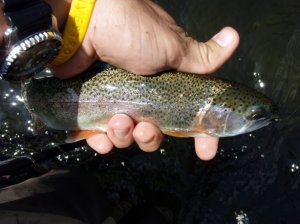 I have been known to badmouth trout from time to time, but standing there in the cool current with this shiny little fish in my hand, I found myself suddenly wishing for high mountains and cold clear streams.
Still, the next day it was nice to get back out with the big boys: 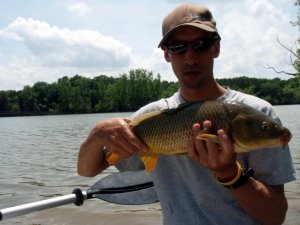 Post Script: My wish may soon be granted. We’re planning a short trip to the Smokies next week, and I may be able to sneak off for an afternoon of fishing…