We’re just back from a trip on the Trans-Siberian Railroad, a nearly 5000 mile journey from Moscow to Beijing. We spent several days in Severobaikalsk, a small city at the northern tip of Lake Baikal.

The lake has about half the surface area of Lake Michigan, but at over a mile deep it holds more fresh water than all of the Great Lakes combined! It is also home to many unique species of plants and animals, including a rare freshwater seal and a small salmonid species called omul. Omul is an important food fish in the area. It is mostly dried or smoked but also eaten raw with salt sprinkled on top.

We spent one day touring the tip of the lake by boat. We stopped for lunch at a beach on the end of a long, thin barrier island. Great schools of juvenile omul moved close to shore and, despite their normally zooplanktonivorous nature, I was able to catch quite a few of them on a small red fly. 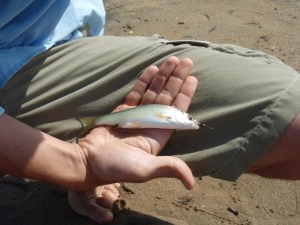 One thought on “Trans-Siberian”