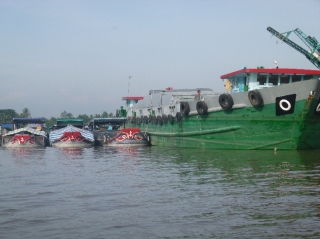 Towards the end of our trip to Vietnam, Tara and I visited a “homestay” in the Mekong Delta.  When I expressed an interest in fishing, our hostess was happy to oblige.  After seeing only a couple of fishing poles in the entire country I knew that sportfishing was a luxury so I wasn’t sure what form our “fishing” would take.  I did not expect what happened next…

The fishing was simple.  Gather bait for a half dozen small fish traps, set the traps in the tidal flood zone, then come back in several hours to see what swam in:

The real star of the show was the bait itself – freshwater snails.  Our fishing guide, the housekeeper’s husband, whose English consisted of the word “hello,” grabbed a large plastic container and plunged into the nearest irrigation canal, and we followed.  The canal was about seven feet across and a hundred yards long.  We slogged carefully through the knee deep mud, feeling along the bottom for freshwater snails that proved to be incredibly abundant. 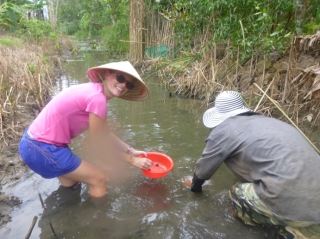 We quickly realized that we were not just collecting bait but also our dinner!  After filling a large tub with snails, and a few fish, clams and freshwater crabs picked up along the way, the whole mess was soaked in clean water with lemongrass and chopped chilipeppers. 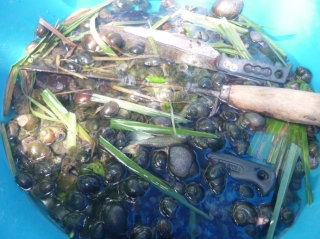 Finally, the snails were boiled and served with a citrus – garlic dipping sauce. 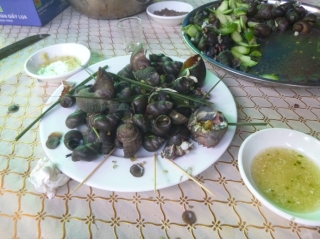 The local style was to poke the foot of the cooked critter with a toothpick and then unwind the whole mess from the shell in one smooth twirl.  The “whole mess” proved a bit gritty and slimy but I discovered that removing and eating just the foot was quite delicious.

Next time you find yourself with some free time in the Mekong Delta, inquire about snail hunting.  It is a crazy, muddy and tasty culinary adventure!