It was overcast and rainy, but the wind was calm and the water was glassy so we packed the SUP boards for a one-way paddle along the East side of the island.

The first mile was deep and sandy but we soon found ourselves paddling along the back edge of the barrier reef. I had fished this stretch several times, without much luck. The water always looked incredibly promising but the action was consistently disappointing. I mentioned this to a number of fishing friends and they all told me the same thing – divers. Apparently the area gets heavy traffic from spear-fishermen and unfortunately, the results are noticeable. It’s hard to catch and release a fish once you’ve shot it through the spine. 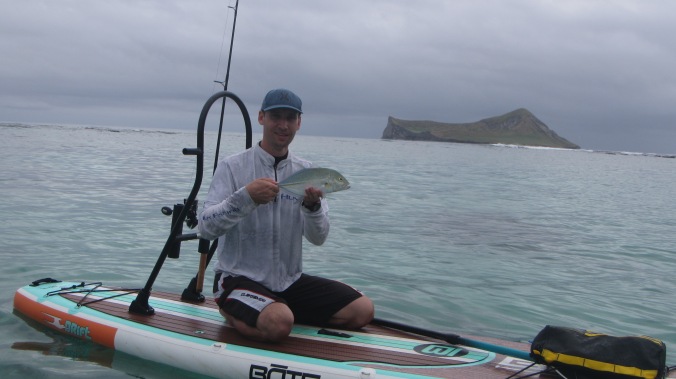 This morning I got lucky and found one papio alongside a rocky protrusion. It still amazes me how quickly and how far even a small fish like this can drag me on the paddle board, and they never pull me away from the rocks! I always end up trying to play the fish with one hand while trying to paddle with the other. Not getting pulled around by fish is one of the advantages of using an anchor, but those come with difficulties of their own.

After catching the fish I had to stow the rod because the low tide forced us into a sort of reefy maze. We had to carefully thread our way between the giant boulders and coral heads that were lurking just below the surface, waiting to catch a skeg and send us tumbling into the water.

Whatever the reason is, this spot just doesn’t seem to hold many fish. I don’t think I’ll be back anytime soon, but it was nice to leave it on a high note with a good little papio and an excellent morning on the water.

This spring I have fished a couple of days with Ed Tamai, who is probably the most venerable bonefish guide on the island. The other day as we climbed out of his boat to wade a section of the flat, Ed said he wanted to catch “a small bonefish, maybe one or two pounds”. The rest of us agreed that we would be happy to catch any bonefish at all. It wasn’t even five minutes before Ed had landed a fish, though it was not nearly as small as he wanted. I had to laugh to myself when, a couple of days later, I hooked a tiny bonefish while blind-casting on an incoming tide. Ed can afford to be choosy, but I will take whatever I can get.

The Fishing Dojo offers a unique style and philosophy of fishing that challenges convention in pursuit of the ultimate goal: Have more fun and catch more fish!
Loading Comments...
Comment
×
%d bloggers like this: