We took a mini vacation to Florida this week for some much needed beach time. We took one day to visit the Everglades, and on a hike we saw evidence of recent high waters – every slight depression in the trail held quickly evaporating puddles which teemed with tiny fishes and crustaceans: 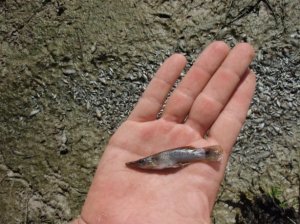 In the late afternoon I pulled out the spinning rod and rigged up a large popper. I didn’t know what to expect but I was fortunate and landed my first ever snook!

I am quite taken by this fish, the black color along the lateral lines is especially striking. I actually hooked up to a second fish, which I believe was another snook, but that one grabbed the popper and swam straight for the tangled roots of a mangrove where I lost it.

The next day we met up with Cordell Baum, a guide I had hired to take me fishing on the flats of Biscayne Bay. Unfortunately, the wind was too strong and we had to go to plan B, Urban Canal Fishing. 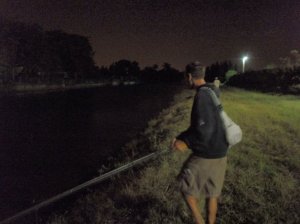 We rendezvoused before sunrise to try for tarpon. We saw the fish rising but got no response to our baitfish imitations. I did hook up on a pretty good fish, probably another snook, but it eventually got free. The only fish of the morning was a small tucanare bass that I landed:

Despite a relatively unproductive day, we had fun seeing Cordell’s ‘secret spots,’ and I learned a lot about how to attack these fish. Next time I’ll be ready.