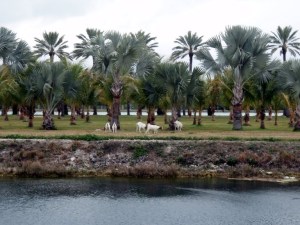 Upon arriving in Miami I was greeted with two pieces of unfortunate information: First, the weather was windy and rainy. Saltwater flats fishing was possible, but very likely it would be miserable and unproductive. Second, Florida had recently experienced a cold snap that resulted in a massive fish kill. My guide, Cordell Baum said he hadn’t even seen a bonefish that season.
The situation reminded me of my last trip to Florida, only worse! Once again it was on to plan B, canal fishing. Cordell was cautiously hopeful. He had spotted some big snook in the canals since the freeze, but he hadn’t seen any trace of many species that were previously abundant.
At our first stop Cordell was overjoyed to see a shoal of peacock bass holding tight to a bridge piling. Those fish wouldn’t bite but as the weather warmed and we fished our way along the canal, we found some that would. 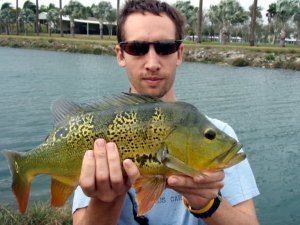 I was able to catch three or four fish in that same spot, during which time I also gained an audience. 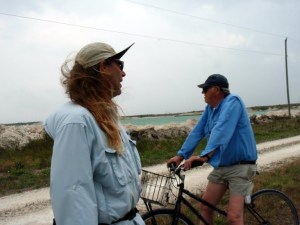 A fellow came along, fighting the wind on his bicycle and while I fished, he and Cordell got to talking. It turns out that the guy is a personal friend of one of fly fishing’s biggest names, Lefty Kreh. What a small world. 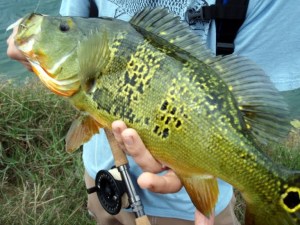 After a solid day of fishing we were finally chased off by a dramatic thunderstorm. Cordell insisted that the fish I caught were going to make many people happy, especially his clients who were already booked for Spring trips and had been hearing only bad news until then. I hope he’s right, and I hope that Florida’s fish rebound quickly because I still need to catch a Biscayne Bay Bonefish.