Just before conditions took a turn for the worse, and the carp all but disappeared, I spent a cool Fall morning on the water. Visibility was poor due to an overcast sky but I finally spotted a fish feeding in the shallows. Determined not to blow what I knew might be my only shot of the day, I anchored and slipped off the boat to stalk the fish on foot. As soon as it turned away from the bank and started gliding towards deeper water I made my cast. Carp tend to become more aggressive in the late Summer and Autumn so I cast just past the fish’s nose and made a few quick strips. As I expected, the fish darted forward to grab my fly.
It was a small fish (for a carp) and it didn’t run far. I fought it through the shallows, trying to move back to the boat where my landing net was. I could feel the fish tiring as I reached the boat, but before I could grab the net the little carp did something I’ve never seen a fish do before. With a final burst of energy it turned nose down and burrowed through the thick mat of algae on the bottom and into the silt beneath. I’ve seen carp take cover before – seen them swim under docks or into a tangle of tree branches, but this fish didn’t swim, it dug.
Once it had disappeared from sight the fish just stopped moving. With the added weight of the algae there was no way I could pull it out of hiding. Instead I picked up my net, and using my line to point out the spot, I scooped deep and lifted the fish, along with a big glob of algae and muck, out of the water. 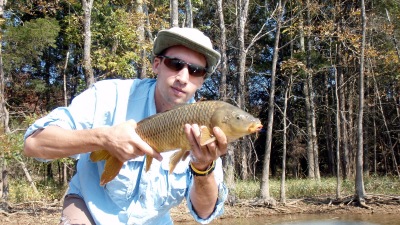