I recently acquired a delightful little book entitled Fish of the Summer Still Waters. Written by several British anglers in 1991, the book discusses some of the more obscure game fish in the U.K. The book’s main sections are devoted to catfish, rudd and eels, with shorter sections on other fish like burbot and grass carp.

The most interesting aspect of the book is how well it highlights the differences between British angling and fishing in the United States. First of all, carp are probably the most popular British game fish! (compared with bass in the U.S.)

Second, much of the freshwater in the U.K. is apparently privately owned and managed, either by individual estates or by fishing or hunting clubs. Permission to fish such water requires various fees or club dues and access to certain ponds or lakes can be a great privilege. Finally, since these waters have been fished by so many anglers for so many years, a unique and highly technical style of fishing has emerged. British anglers spend a lot of time reconnoitring “swims,” channels or depressions likely to hold fish. Often they will “feed” the swims on a regular basis, chumming the area with food, before actually laying out a hook. Sophisticated baits are then prepared by hand from secret recipes that cater to the nutritional preferences of the fish. Several rods are employed by each angler who may actually make camp at the water’s edge in order to fish uninterrupted for a day or more. 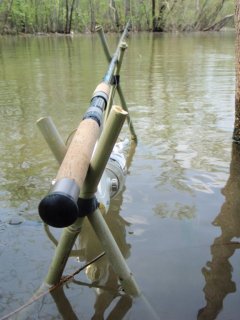 Anxious to catch some carp, but feeling a bit drained from a recent cold, I decided not to take out the boat and instead try some British style carp fishing.
I brought two rods and two different baits: corn kernels and Rob’s Carp Assassin. 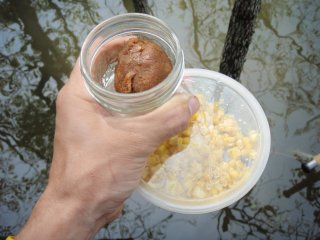 After only 15 or so minutes I had a customer, a nice 5lb (2 1/4 Kg) carp.
After releasing the fish I re-baited and re-cast. Before I could even check my other bait I had a second fish on! This one went just a bit larger than the first, a fine brace of carp!